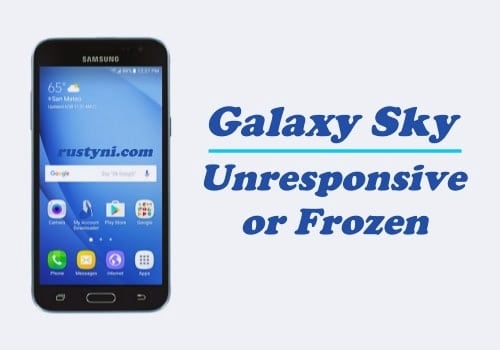 Frozen Samsung Galaxy Sky is a problem that needs to deal with right away and this is where you can find out several possible solution to make this problem go away for good and have your phone works normally.

How to Fix Unresponsive or Frozen Samsung Galaxy Sky – Unresponsive or frozen phone is a huge annoyance. Just imagine that suddenly your Samsung Galaxy Sky don’t respond to anything you instruct it to do. It won’t open any app, it won’t close down and it won’t do anything. This kind of thing happens to other smartphone as well, mostly caused by system crash or glitch in the system.

The simplest solution to solve this issue is to force reboot the phone. Since you can’t reboot the phone using the usual method, you must force reboot. Samsung Galaxy Sky has removable battery, means that you can simply plug out the battery for a couple of seconds before placing it back and turn on the phone.

When the battery is out of the case, press “Power button” to help release any trapped current on the phone. It will help greatly in solving this issue. Once you put the battery and turn on the phone, check to make sure that the problem is no longer exist and your phone are responding to your instruction.

But if you don’t want to be bothered releasing the phone casing and the battery, and after that put them back on, you can force reboot the phone using other method, which is:

Rebooting the phone will clear any glitch or system crash. When you have clear all those things, nothing will affect the phone performance and in this case, you will get your phone respond to whatever instruction you put in there. Now, you can use the phone normally and go on with your life.